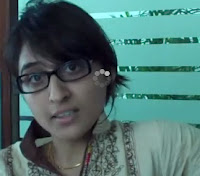 Puruesh Chaudhary’s passion entails creativity and inception of new ideas and enjoys working with innovative and forward thinking minds. She has over 7 years of experience in media and communications pertaining to key functional areas covering research and content development. She has been a professional broadcast news editor and has worked in leading news channels in Pakistan; both in Urdu and English where she has been designing and developing content for news, current affairs and other special assignments.

Her forte is to enable the concepts of knowledge collaboration & information sharing by developing strategic content and outreach communication techniques that have an impact on the socio-economic developmental models. She contributes on matters of energy, food security, water, national security and media’s role in covering issues impacting globalization.

Puruesh has been delivering lectures on media’s role in economic development at the World bank, Harvard University, U.S. State Department’s Special Initiative on Tech@State. Along with other platforms in Pakistan.

After a successful career in the media industry, Chaudhary identified gaps in the content being generated and its impact on the realities of the society. Puruesh Chaudhary launched a new venture in 2010, Foxtrot Consultants with the intention of building capacity of the stakeholders on different verticals that create news on daily basis. She is managing and developing content on issue-based initiatives in Pakistan, that have an economic and socio-political impact with a possibility of resulting in either internal or external conflicts.

Chaudhary’s role as the Director Content and Editor-in-Chief for Mishal, requires her to develop conceptual terms on key development indicators and functional areas that covers research and development, which facilitates monitoring and evaluation with multiple contingencies. Her objective to formulate, implement and evaluate Strategic Content and Outreach Communications is through assessing internal and external situations.

She has an indepth understanding of the social, political, economic and technological unaddressed challenges, which could be the means of enticing radicalization in the society. Chaudhary believes that if these challenges are not dealt with will potentially add more nuisances to global unrest and pose grave threats for societal co-existence in the coming years.

Prior to being a part of the “Media Development Initiative” by shaping the future of Journalism, Chaudhary was working in Samaa TV, heading the forward planning. She was responsible for generating and implementing original thoughts and concepts related to news and programming while integrating the channel’s initiatives. She enabled the channel to create content on international indicators for economic growth and sustainable development issues; bringing global perspective.

In December 2006, Chaudhary joined DawnNews as a professional broadcast journalist/editor. Her position required her to generate and edit content, create rundowns, manage packages and produce regular Live bulletins for the station.

During her short tenure at the Coca Cola Export Corporation, she was handling the corporation’s public affairs, CSR-activities and their European edition. Within the automotive industry; she worked with Porsche’s Management in setting up their Operations in Lahore and Karachi.